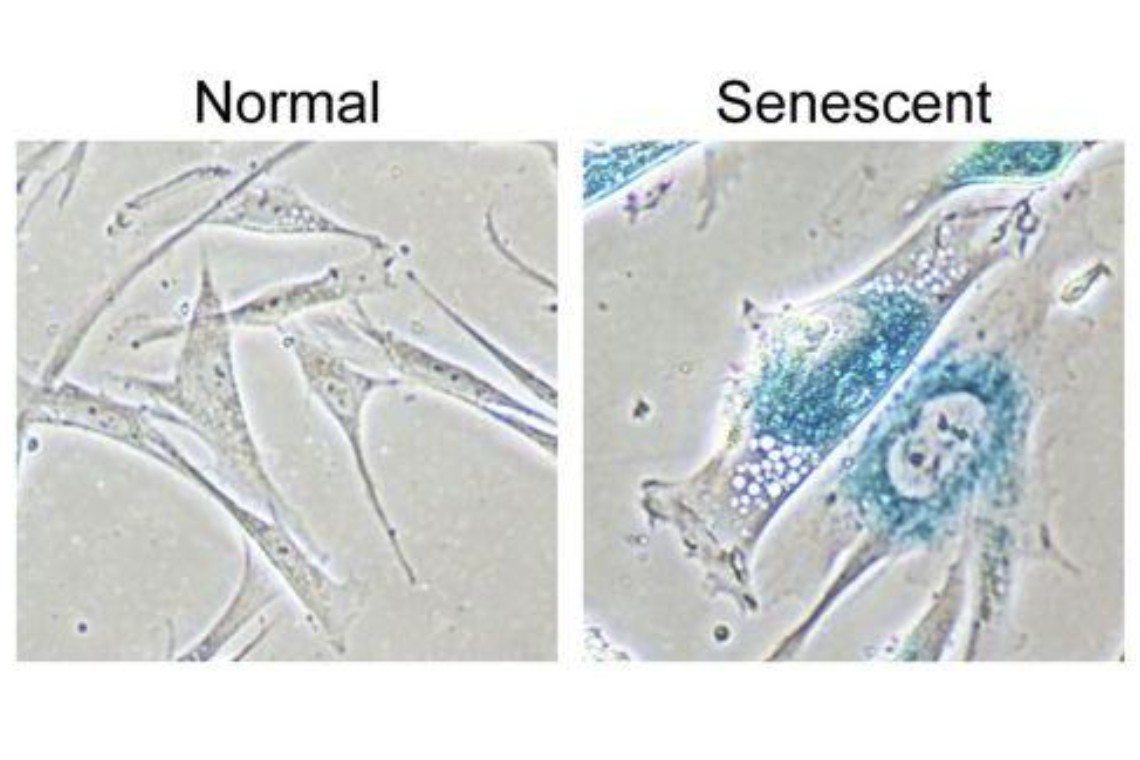 The above diagram shows the difference between a normal cell and a cell which is in a senescent state.  A senescent cell is one that has stopped replicating.  Although senescent cells can no longer replicate, they remain metabolically active and commonly adopt a pattern of secreting pro-inflammatory cytokines, the up-regulation of immune ligands, which means fooling the immune system to not attack them.  In general, these cells are trouble makers!

We now know that osteoarthritis is an inflammatory process that is age related.  Recently, there was a significant announcement concerning discovery of a drug that may delay, prevent, or even reverse the progression of osteoarthritis.  Called UBX0101, it has a rather interesting mechanism of action in that it eliminates senescent cells.

Healthy cells that experience stress can enter a state known as cellular senescence.  In this state, cells stop dividing and profoundly alter their metabolism, appearance, and interactions with their environment.  The subcellular damage itself does not directly cause the visible signs of aging, but rather, as the damage accumulates and reaches a critical mass, cells cease to proliferate and acquire the deleterious “senescence-associated secretory phenotype” (a fancy way of saying the cells have changed character and altered the compounds they produce) which then leads to the consequences of tissue breakdown to create an aged cell.

Thus, senescence is a precondition for tissue aging, and this explains why aging is a gradual process that remains largely invisible during most of its progression.  The subcellular damage includes shortening of telomeres, damage to mitochondria, and DNA double-strand breaks triggered by various genetic, and environmental factors.

The senescent cells will accumulate over time.  These cells are capable of doing damage on a molecular level.  They will accumulate growth factors, proteases, and inflammatory factors that disrupt normal tissue function.  Senescent cells comprise a small number of the total cells and have long been implicated in aging.  Some rapidly dividing cells reach a point when they can no longer safely replicate because their telomeres become too short to protect the cell’s DNA.  At this point, a cell will either destroy itself through a process called apoptosis, become dysfunctional (and potentially cancer-prone), or turn replication off but continues to survive.  The cells that turn off are known as senescent.  They can perform some functions, but they also release molecules that may increase risk for a variety of diseases, including cancer.

These cells are capable of producing those cytokines which are responsible for pain and inflammation in a joint or even worse cause systemic problems such as diabetes.  Cytokines are molecules which act as signals for the cells telling them what to do.  Some of these cytokines are “bad”.  They are named Interleukin-1, Interleukin-6, and Tumor Necrosis Factor.  They are called master inflammatory cytokines.

It has been discovered that these senescent cells accumulate in the joint and do their bad deeds.  UXB0101 will selectively kill these cells.  In cartilage grown from human knees with advanced OA, UBX0101 selectively eliminated senescent cells, increased proliferation of healthy chondrocytes, and induced new cartilage growth.  This represents a new group of therapies called senolytic medicines to selectively eliminate senescent cells and thereby treat age-related afflictions such as osteoarthritis, atherosclerosis and certain eye diseases.  This brings us to a whole new field of possible therapeutic agents that may help with anti-aging and Regenerative Medicine.  These senolytic agents are generating a good bit of scientific interest, and there is now a race to study certain drugs that can have senolytic properties.

I did a good bit of investigating and found that there are a number of natural compounds that act on senolytic cells.  Some of these are contained in over-the-counter supplements.  Studies have shown the benefits of combining tocotrienols with quercetin, a flavonol.  Flavonols are phytochemical compounds found in high concentrations in a variety of plant-based foods and beverages.  They are common in many fruits and vegetables.  Quercetin also has dual and complementary actions with regards to aging cells.  Like tocotrienols, quercetin can induce senescence and promote cell death in numerous types of cancer cells.  Like tocotrienols, quercetin has the opposite effect in healthy cells, delaying senescence in younger cells and rejuvenating older cells to rid them of their abnormal, age-promoting function.

Tocotrienols are members of the vitamin E family of essential nutrients, naturally found in grains and nuts.  However, newer information indicates that for other activities including antioxidant, cholesterol lowering, and anti-cancer effects that the tocotrienols (T3's), especially delta-tocotrienol (delta T3) exert more profound effects.  I found some interesting information concerning the strengths of Vitamin E.  So, in terms of vitamin E activity, the order of potency would be:

We can see that the T3 tocotrienol has the most potency and probably the best chance of being a senolytic agent.  Let us take a closer look at Vitamin E, more specifically Vitamin E T3.  Here is a helpful diagram. 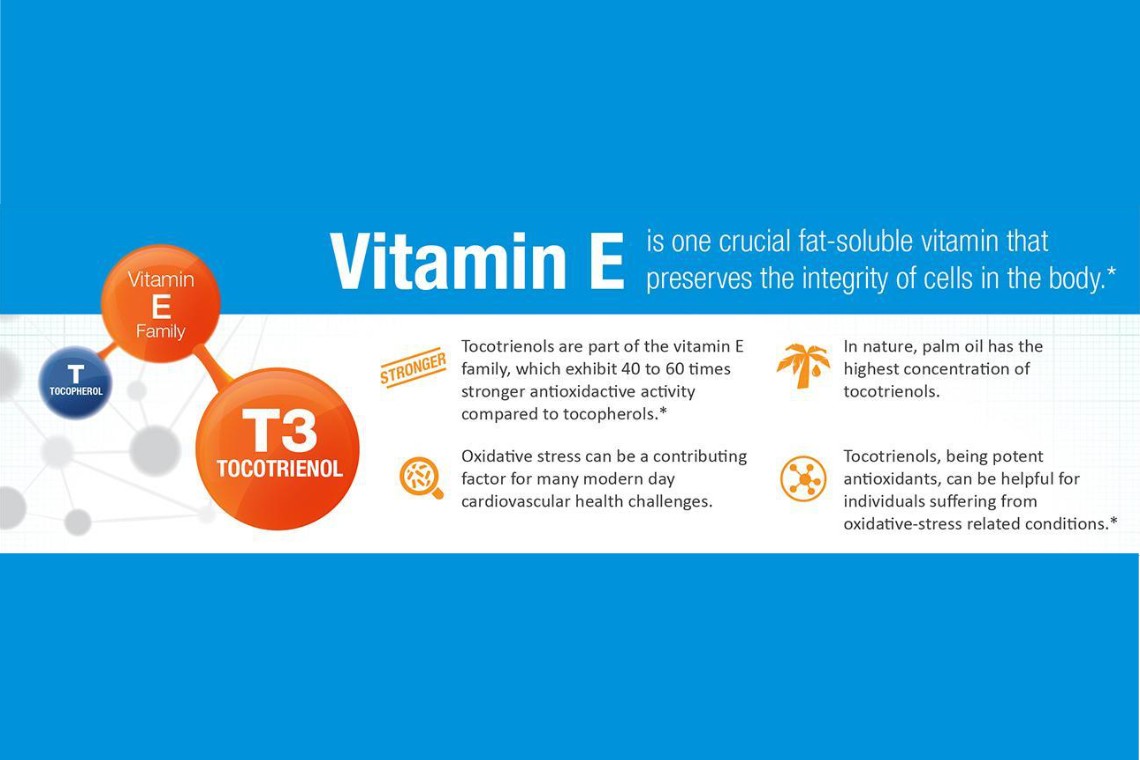 Another promising senolytic agent is fisetin.  Fisetin is a flavonoid (a plant pigment that gives plants color, smell etc.) and is derived from various fruits such as strawberries.  Fisetin also has direct activity as a reducing agent, chemically reacting with reactive oxygen free radicals to neutralize them.  Based on lab studies, it appears that fisetin lodges in cell membranes and prevents oxidative damage to lipids in the cell membrane.

Now comes the tricky part.  We do not think it is best to continue on some of these supplements on an indefinite basis.  I suspect it would be best to take them on an occasional basis.  We feel the best method would be to combine a few of these supplements in a propriety manner.  This would eliminate a good number of the senescent cells.  This elimination would hopefully have a cascade effect that would significantly help reduce inflammatory cytokines.  Essentially, what we are doing is allowing the regenerative cells to have a better chance of achieving success.  We now feel we are ready to launch a program to achieve a reduction in the senescent cell population.

Will senolytic agents be a game changer? Only time will tell.  I am not a betting man but if I were a betting man I would bet on them.  They might take us one step closer to the promised land.