Anti-Aging and Stem Cells – Is This the Holy Grail? 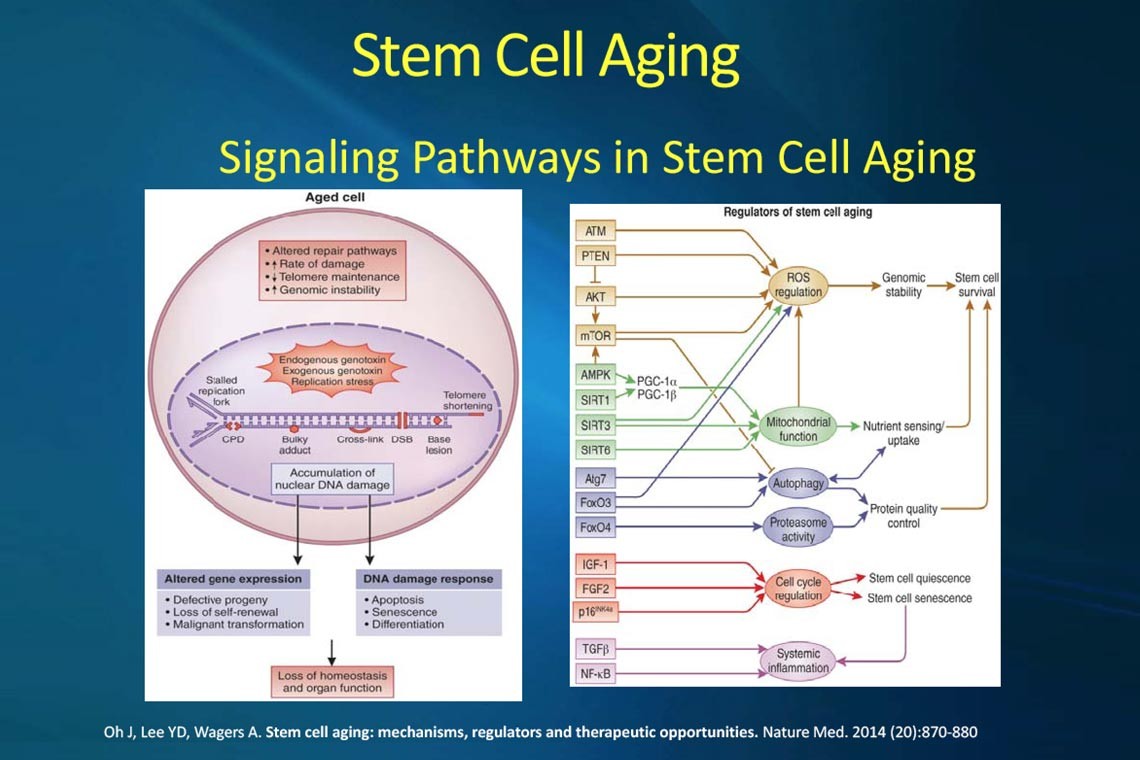 There has recently been a spate of scientific articles and a buzz on the internet about the use of stem cell therapy for "anti-aging" treatments.  This is something we have been involved with for some time now.

Even before the days of Ponce de Leon, mankind has been intrigued by the quest for true age reversal.  Recently, there has been quite a buzz following publication in the Journal of Gerontology of a study conducted at the University of Miami under the direction of Dr. Joshua Hare.  An editorial in the journal stated the following:

"MSC transplantation is a promising and innovative approach for the treatment of frailty in older humans" and "stem cells might be the vehicles for youthful regeneration of aged tissues."  What the Hare group did was to obtain bone marrow derived mesenchymal stem cells from young healthy volunteers.  They then grew the cells in a lab increasing their numbers and gave the cells back to older individuals.  So far, the studies have shown significant improvement in some aging parameters.  The cells that are transplanted are called allogenic cells meaning they are from a different patient.  We have to commend Dr. Hare and his group for doing this study and advancing the world of stem cell science.  Having been involved in the stem cell world for some time now, I have seen similar findings from work done elsewhere.

Although I am not condoning it, mesenchymal stem cells have been used for years as an IV preparation.  Typically, these were the patient's own stem cells usually obtained from the breakdown of fat by an enzyme.  Under current rules, this practice is not allowed by the FDA.  Patients would report improvement in a number of afflictions, especially pulmonary problems.  However, the evidence was mainly anecdotal.  From a scientific viewpoint, this may have occurred from the release of various growth factors.

Taking it one step further, giving cells from a younger patient probably is beneficial in that the cells may have better vitality and more growth factors.  But there is one big BUT here.  We must realize that, when we are using allogenic stem cells, these are not immune privileged but they are immune evasive.  Eventually, the body will catch them and destroy them.  Will this make a difference? No one can say for sure.

I suspect a good arm of the study might be to use the patient's own stem cells, expand them and give them back to the patient.  Whether we get the same results as a transfusion from a young patient remains to be seen.  Another, intriguing aspect might be to use cells derived from a first or second degree relative.  Also, do we want to use some of the plasma from the younger patient?

Another question to ask is whether or not we need to expand the number of stem cells to achieve maximum efficacy.  I suspect that antiaging treatments may well be related to using an increased number of stem cells.  However, one concern of mine is that we know when mesenchymal stem cell populations are expanded they seem to lose some of their immune-modulatory aspects.  Is this a problem?

Perhaps it might be better to expand the number of stem cells while they are still in the body.  In other words, let the body increase the number of cells, through a variety of methods already known to exist.  There are some medications, such as Neupogen, that can do this but Neupogen is expensive and can carry serious risks.  Some safer methods include laser stimulation, certain supplements, hyperbaric oxygen and its offshoots.  Will these techniques work better? Only studies will show.  Meanwhile, these treatments do not run afoul of the FDA.

The other question to pose is whether it would be better to use bone marrow aspirate intravenously.  Bone marrow aspirate can be rich in a type of cell called a T-Reg cell.  T Reg cells have a very important control in our immune system.  In particular, they help to eliminate autoimmune diseases.

About a year or two ago there was some buzz about transfusing blood plasma from young rats to old rats.  The results were very promising.  The researchers found that the old mice had a reversal of many of the aging processes especially in the brain.  The researchers found a protein in the blood of the young mice called GDF11.  In this case we are not just slowing down the clock but we are actually turning it backward.  There is controversy concerning the GDF11 protein and it is not universally accepted by the scientific community.  Some studies showed it to be very beneficial while other studies showed no benefit or even a negative benefit.  I can confidently say the jury is still out on GDF11.

We have been involved in some antiaging/fragility studies in our office.  These studies involve an "early" CD-133 stem cell.  This cell is obtained from the patient after stimulation of the marrow with a few different supplements including intravenous CoQ-10.  These cells are processed and activated in a propriety fashion and given back to the patient intravenously.  We have seen improvements on a number of different levels.  This stem cell is sometimes called a V cell or very small embryonic like stem cell.  However, a "v cell" is not yet universally accepted in the scientific community.  If we think of them as a primitive CD-133, then there is greater acceptance.

These very small stem cells are thought to be capable of forming almost any type of tissue.  For this reason, these cells are called pluripotent.  As I have alluded to in other blogs, these cells may be considered the body's emergency stem cell supply.  They also seem to be implicated in acupuncture.  These cells are found in something called Bonghan Channels which are intimately related to acupuncture.  The problem with the V cells is that they are normally difficult to activate.  However, thinking outside the box, researchers have devised ways of turning these cells back on.  These are the patient's own cells and the methods of turning them back on are proprietary.

In working with these unique cells, we have had the good fortune of achieving some excellent results.  The tantalizing question is whether these cells can be harvested from a son or daughter or grandchild and given back to an older related adult.  There is no reason why they cannot be used.

There are some other methods that will slow down aging.  We know for sure that starvation will extend life but we are not sure about age reversal.  Nonetheless, it looks promising.  It appears to turn on the surtuin 1 gene.  Stimulating this gene may increase stem cell survival and ultimately our own survival.

There are many supplements that we know may at least help slow down aging.  Some of these include derivatives of beets, broccoli, and a host of other compounds.  It appears that these compounds have a distinct effect on stem cells.  These supplements can affect the stem cells in many different ways.  They may affect the stem cell environment or, as it is also called, the stem cell niche.  If the environment is hostile, then the stem cell has a much lower chance of success.  Those supplements that effect the niche are often considered antioxidants.  The job of the antioxidants is to neutralize the effect of what are commonly called free radicals.  These free radicals occur when the body utilizes either oxygen or nitrogen.  We are beginning to realize that Nitric Oxide is extremely important to many body functions.  Nitric oxide is now known to be a growth and immune neuromodulator, as well as a stimulator of stem cell proliferation.

I am certain that stem cells will have an increasing importance in our quest to slow down aging and allow us to age gracefully with fewer of the afflictions of aging.  I think we need to remember that it will not be the stem cells alone but other aspects that will have a direct impact upon them.  Hopefully, one day we can make the hands of father time's clock start to run backward or at least advance more slowly.