NAD+ And Cell Senescence: Are These Two Entities On A Collision Course? 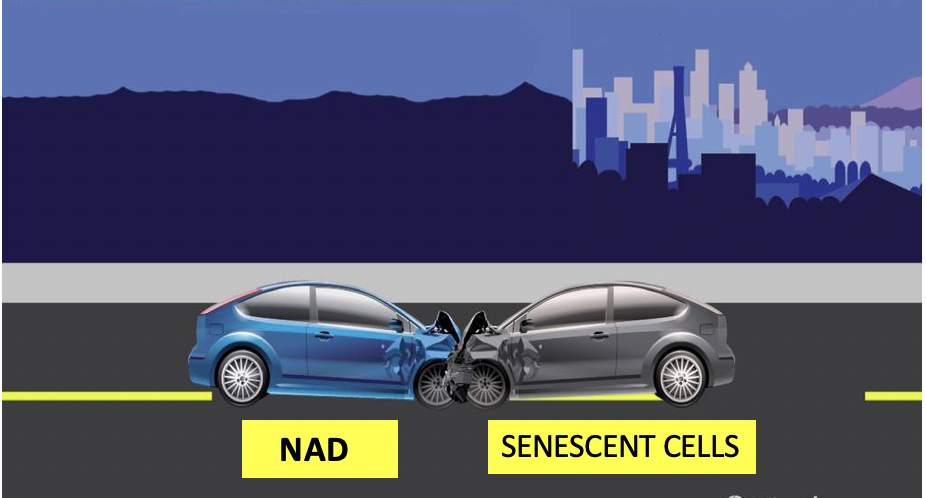 Unfortunately, many of the effects of the Senescent cells are found in the dark side of the first diagram. The elimination of Senescent cells by senolytic regimens (programs designed to kill senescent cells) appears to help in numerous aging-associated diseases including atherosclerosis, pulmonary problems, diabetes, neurological problems, cancer and osteoarthritis. Senescent cells secrete pro-inflammatory factors which are called Senescence-Associated Secretory Phenotype (SASP). These are essentially the “bad growth factors”. By the mechanism of the inflammatory growth factors, the Senescent cells are believed to contribute to numerous age-associated diseases. The second diagram shows the causes of cell senescence. These causes of cell senescence are essentially the causes of aging. We can see that the causes are multiple. The causes involve the usual suspects including DNA damage, mitochondrial damage, damage to the ends of the DNA called the telomeres, and finally what we call epigenetic factors.

Epigenetic factors have far reaching effects. They involve changes to gene expression that our cells experience as we get older. These are commonly called epigenetic alterations. The following diagram demonstrates these facts. There are many factors that can affect the genes. The diagram shows some of the examples. These genetic alterations harm the fundamental functions of our cells and can increase the risk of cancer and other age-related diseases. The DNA is affected by the inflammatory cytokines secreted by the Senescent cells. These secretions are modifying gene expression in a cell, suppressing or enhancing the expression of certain genes in a cell as the situation demands. The genes which are turned on the cell can either be a friend or a foe. It can help prevent a cancer or help cause it. Here are two recent articles from two reliable sources concerning senolytic agents. As you can see Senescent cells are not some esoteric idea. They are becoming mainstream medicine. We are acutely aware of the importance of senolytic agents for overall health. They seem to be very important in NAD therapy also. Here are the articles: There is one other article which I will share with you which is more scientific discussing the Senescent cell problem. So, the real question is what do Senescent cells and NAD have to do with each other? Furthermore, are their paths on a collision course?

Now I would like to discuss the collision course that NAD and Senescent cells are on. Recently I read a scientific article that was quite fascinating and thought provoking. The article discussed the ramifications of taking NAD+ supplements and their effect on Senescent cells. Let us do a quick review of NAD. NAD+ is a potent stimulator of the SIRT-1 gene pathway. This pathway is thought to be one of the major anti-aging pathways. This is the pathway that many people are familiar with by the effects of the compound Resveratrol which is found in red wine. Other methods of stimulating this pathway include calorie restriction, intermittent fasting, keto diet, high intensity exercise training, and perhaps most importantly NAD. When all is said and done the Sirtuin pathway stimulates the production and efficiency of the mitochondria which provide the cells with energy. Typically, the more mitochondria the healthier the cell and for that matter the healthier the person. From the point of view of anti-aging, NAD has tremendous potential. However, it seems that NAD may act as a double edge sword as we get older. There is no doubt that we become deficient in NAD as we age. The reason for this is multifocal. One important reason is that certain enzymes in our body become large consumers of NAD. Some of these enzymes are involved in the process of repairing DNA damage. If there is not enough NAD to go around than the NAD gets shuffled to the cells where it is an absolute necessity or the cells die. However, the consuming enzymes continue to try to utilize NAD but they will unfortunately not be able to accomplish DNA repair. If we are able to consume adequate amounts of NAD these enzymes get turned back on and do their important repair work. We are able to increase the amount of NAD available to the body by a variety of methods. One of the secret weapons we utilize is an NAD kinase patch. The NAD kinase patch contains an enzyme, NAD kinase, and penetrating molecules. This combination will dramatically increase the amount of NAD that enters the cell. As we age, we become deficient in the NAD kinase enzyme. This enzyme is the cutting edge of the cutting-edge technology especially when it pertains to NAD administration. It allows greater amounts of NAD to enter the cell.

So far all seem good except for one detail. Both myself and my wife take NAD on a daily basis. We occasionally use the Kinase patches. We are doing this to hopefully “slow down” our aging. On the surface this makes perfect sense, yet some of the newest thinking demonstrates some potential problems when dealing with NAD administration. There is no doubt that I have Senescent cells in my body (recently I did a once a week x 2 regimen of Senolytic agents which has had some surprising beneficial effects). In the article I was referring to, on one hand it stated that the NAD+ levels decrease as we age leading to degenerative conditions. While at the same time, the number of senescent cells will increase with aging. The article states that decreased NAD+ levels that are associated with aging may actually decrease the effects of the senescent cells on the body. Conversely increasing NAD+ levels by supplementation either orally or intravenously or both methods may benefit tissue homeostasis, but also may worsen SASP and make the make the Senescent cells more aggressively inflammatory. This is certainly not a good thing.

TAKEN TOGETHER THESE FINDINGS SUGGEST A FUNDAMENTAL TRADE-OFF IN TREATING AGING RELATED DISEASES WITH DRUGS OR SUPPLEMENTS THAT INCREASE NAD+.  So, the bottom line is that we are increasing NAD levels which is a good thing but at the same time we are also making the Senescent cells increase the secretion of the inflammatory growth factors which is a bad thing.

Another concern is a report that senescent cells can induce a cell surface protein called CD-38 on macrophages (a type of white blood cell in the immune system) and endothelial cells (Endothelium refers to cells that line the interior surface of blood vessels and lymphatic vessels, forming an interface between circulating blood or lymph in the lumen and the rest of the vessel wall).  CD-38 is a molecule important for many different cellular processes, including calcium signaling, which regulates basic cell functions. CD-38 is the main enzyme involved in the degradation of the NAD precursor nicotinamide mononucleotide (NMN) in vivo, CD-38 has a key role in the modulation of NAD-replacement therapy for aging and metabolic diseases. However, too much CD-38 is a sign of inflammation. Research has linked overexpression of CD-38 to obesity, cancer, and infectious diseases, like HIV. Both the decline in NAD+ and the presence of Senescent cells are hallmarks of aging. We are aware that a supplement called Apigenin seems to help block the effects of CD-38. (Apigenin is found in many fruits and vegetables, but parsley, celery, celeriac, and chamomile tea.  Apigenin is particularly abundant in the flowers of chamomile plants). Apigenin may eventually be part of a regimen when administering NAD.

Until recently, it was unclear exactly how rising CD-38, declining NAD+, and the presence of senescent cells were all related. Scientists also know that the presence of CD-38 levels increase with age, and that CD-38 is involved in lowering NAD+ levels. It is a major consumer of NAD. In turn increased CD-38 expression is believed to be the key modulator of lowered NAD+ levels with aging in mammals. CD-38 is intimately related to our immune system but unfortunately not in a good way. In the following diagram, we see that the inflammatory growth factors from Senescent cells have a direct effect on what is called an M-1 macrophage. This is a type of white blood cell which is many times associated with inflammation in the body. Not a big problem when we are dealing with bacteria but not good for anti-aging.

The accumulation of Senescent cells may itself be an important safeguard causing decreased NAD+ levels which in turn could promote a multitude of problems. On the other hand, the lower NAD+ levels may diminish the influence of Senescent cells which is the safeguard. What the scientists found was two-fold: First, they observed that inducing senescence did not lead the senescent cells themselves to produce more CD38. But, the senescent cells did, as expected, begin secreting a cascade of inflammatory chemicals that in turn, up-regulated CD38 in surrounding non-senescent cells. In other words, they infected normal cells much like a zombie infects normal people. Interestingly, they found that different inflammatory factors did not individually increase CD-38, but when combined led to a strong increase in CD-38 activity. In the end, the scientists observed this affect in all the types of cells tested. We are aware that Quercetin and Apigenin are two supplements that can diminish CD-38 effects. These also act as senolytic agents. As a matter of fact, Quercetin is found as a senolytic agent in many University studies. In these studies, Quercetin is combined with Dasatinib to act as a super senolytic agent. Dasatinib is a Leukemia medication that is being used “off-label”. Because the dosages are extremely small the side effects are minimal. The elimination of most senescent cells by senolysis (the killing of senescent cells) before initiating NAD+ therapies may be beneficial and increase safety. There is the possibility that it may eventually allow for need for little IV therapy and mainly rely on oral medication.

I think to treat the patient with some form of senolytic agent prior to NAD therapy may possibly the new standard of care for patients receiving NAD therapy. Unless we address the Senescent cell/CD-38 problem, trying to raise NAD+ levels with precursors may come with too many downsides, preventing us from both having our cake and eating it too.

So, what is the real bottom line? We strongly feel that Senolytic agents are imperative when using NAD+ intravenously or orally. Actually, I think they have a place in almost everyone. We want to diminish Senescent cells and their inflammatory growth factors and at the same time increase cellular NAD levels. Luckily, we have been aware of the Senescent cell problem some time now. We have been treating our patients with a number of different senolytic agents for some time. Some of these have included a P-53 patch, certain supplements such as Quercetin, even utilizing Quercetin and Dasatinib together. We have worked out very specific regimens for this. If a physician is not taking steps to deal with Senescent cells his overall chance of success will be much lower in Regenerative procedures and overall patient health. Furthermore, there is the possibility that the patient’s overall health may take a turn for the worse in the long run by increasing the effects of the senescent cells. Here is the bottom line from an article I read “reducing the senescent cell burden in persons around age 60 and middle-aged obese individuals may become a critical step in restoring youthful NAD+ cellular levels in a way that maximizes benefit. Younger, non-obese individuals may not have a significant senescent cell burden and thus may not need aggressive senolytic therapy before contemplating NAD+ restoration”. These are excellent recommendations.

IF A PHYSICIAN WHO IS ADMINISTERING NAD+ IS NOT ADDRESSING THE SENESCENT CELLS PROBLEM THAN I SUGGEST THE PATIENT SEEK TREATMENT ELSEWHERE. YOUR HEALTH IS AT STAKE!!!