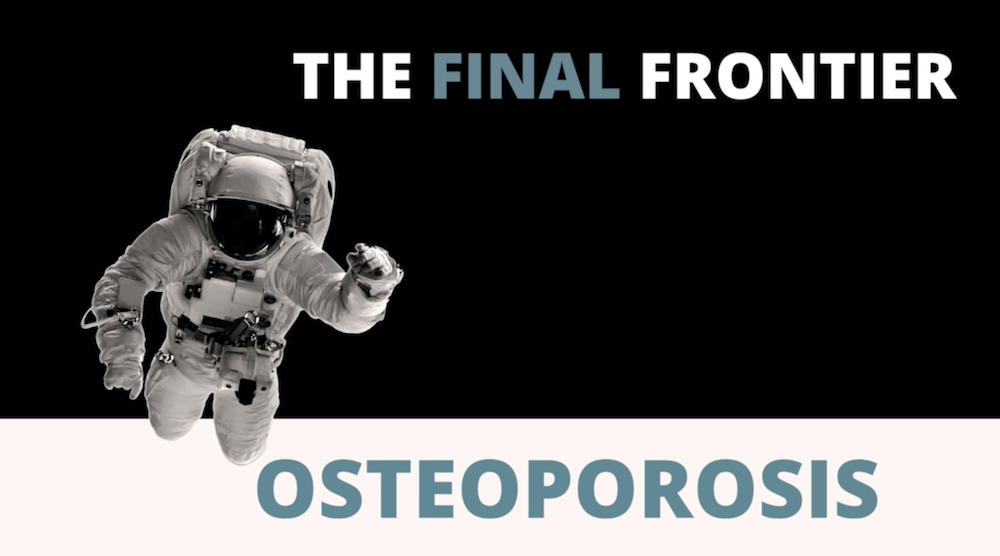 Osteoporosis is a disease that weakens bones to the point where they break easily—most often, bones in the hip, spine, and wrist. Osteoporosis is called a “silent disease” because you may not notice any changes until a bone breaks. All the while, though, your bones had been losing strength for many years. Some risk factors for osteoporosis such as being older and female or having a family history of the condition cannot be avoided. But others can, like smoking cigarettes, consuming alcohol, taking certain medications, or being exposed to environmental pollutants. But until now researchers haven't gained a firm picture of how these exposures link up with bone loss. But now the fog is begging to lift. We now know that these environmental hazards seem to affect a very important of genes called the Sirtuin genes which ultimately affect the mitochondria.

Recently, in my reading I discovered some very interesting articles. It now appears the one of the main causes of Osteoporosis may be damage to mitochondria. The mitochondria are the powerhouses of the cells. They help produce energy of the cell in the form of ATP. We are now aware that many of the diseases of aging are related to mitochondria damage and degeneration. The following is a diagram of the mitochondria and its relationship to the rest of the cell. It seems that when mitochondria are damaged it will lead to a surge in a cell type called an osteoclast. An Osteoclasts is a cell that nibbles at and breaks down bone and is responsible for bone resorption. Recent animal studies indicate that longevity-associated Sirtuin genes (especially the SIRT1 gene) may serve as an attractive pharmacological target for the treatment of osteoporosis and other bone related disorders. Now let us talk a bit about the Sirtuin genes of which SIRT1 is a very important member.

The Sirtuin genes are also called the longevity genes. There are seven of these genes which are intimately involved in mitochondrial health and numbers. They have a profound effect on many of the different aging pathways in the body. One extremely important fact is that they seem to influence mitochondrial health and numbers. Healthier and increased numbers of mitochondria ultimately lead to more ATP production. Furthermore, we are now aware of the fact that mitochondria do many other tasks other than producing ATP. They may act as signaling beacons directing different cells to different tasks.

A new study led by researchers from Penn's School of Veterinary Medicine reveals a mechanism by which Sirtuin factors and osteoporosis may be linked. Damage to mitochondria—key cellular organelles and energy generators—leads to a surge in the creation of cells called osteoclasts, which are responsible for breaking down bone. The researchers reported these findings in the FASEB journal (Federation of American Societies for Experimental Biology). Here is a quote from the paper “ In a normal individual, the process of bone degradation and rebuilding proceeds in a very balanced way, but in some people they somehow produce a lot more osteoclasts, and this leads to bone loss and osteoporosis," said Narayan Avadhani, a biochemist at Penn Vet and senior author on the work. "We show in this paper that, when mitochondrial function is affected, it not only affects energy production but also triggers a type of stress signaling that induces the overproduction of osteoclasts.”

It appears that the mitochondria effect a certain type of immune cell called a macrophage. Macrophages are a front line for the immune system, engulfing and digesting foreign invaders to the body. Macrophages are very important cells of the immune system. They have the ability of morph into many different types of cells. Depending upon their environment they can cause tissues to heal or encourage the breakdown of tissue. Macrophages can diversify and transform into osteoclasts when the circumstances are right. This research was performed at Mount Sinai School of Medicine. In this study when the mitochondria were damaged the macrophages underwent stress signaling and transformed into osteoclasts at a much faster rate. We now see that relationship between environmental factors and Osteoporosis may be related to mitochondrial damage.

There are other studies which show a distinct relationship between the Sirtuin genes and Osteoporosis. This makes complete sense given the fact that the Sirtuins and Mitochondria are intimately related. WHAT TIES EVERYTHING TOGETHER? NAD! NAD stands for nicotinamide adenine dinucleotide. It is a potent stimulator of the Sirtuin genes especially SirT1. The diagram below is an excellent illustration of this relationship. We want to block the bone eating osteoclasts and encourage the bone building osteoblasts. Another good example of this phenomenon is the following illustration of a human thigh bone. In this diagram we see what seems to cause bone formation by the stimulation of Osteoblasts (CR stands for Calorie Restriction). An agonist is a compound that encourages action. Some of the agonists of the SIRT1 genes include Resveratrol, Pterostilbene, and a host of other phytonutrients. We can also see that calorie restriction and the Keto diet should also have a beneficial effect on osteoporosis. I would like to show an article published this month on just what we are talking about. Here is a picture of the front page of the article This article is one of many ground-breaking articles. It appears that compounds that target the SIRT1 gene (THINK NAD etc.) may be new SAFE WEAPONS in the war on Osteoporosis. A similar study from the Institute of Biochemistry and Cell Biology, Shanghai Institutes for Biological Sciences, Chinese Academy of Sciences confirmed the same findings. Their conclusion “Our findings suggested the potential therapeutic role of resveratrol in osteoporosis treatment and stressed the importance of effective doses when applied”.

We are now aware that NAD+ is a game changer on many different levels but there is good scientific evidence that it can have a profound effect on Osteoporosis. One step we are already doing for osteoporosis is using peripheral blood stem cells and cytokine therapy to help improve osteoporosis.

But wait there is one more aspect in our treatment protocol. This is the aspect of Senescent cells. These are cells that should have died but continue to survive. They cause havoc on the body by their secretion of various “bad growth factors.

In the above diagram SC stands for a senescent cell. A senolytic is a compound that kills the senescent cells. More can be found about these cells at my recent blog (https://stemcellorthopedic.com/possible-new-way-treating-osteoarthritis-senolytic-agents/).

Mayo Clinic researchers in Rochester, Minnesota, have found that targeting senescent cells led to an increase in bone mass and strength. The findings, titled “Targeting cellular senescence prevents age-related bone loss in mice” appear online in the August 21, 2017 edition of Nature Medicine. Here is a paragraph from their work:

"While we know from previous work that the accumulation of senescent cells causes tissue dysfunction, the role of cell senescence in osteoporosis up to this point has been unclear," says Sundeep Khosla, M.D., director of the Aging Bone and Muscle program at Mayo Clinic's Robert and Arlene Kogod Center on Aging and a co-author on the study, in the August 21, 2017 news release.

"The novelty of this work for the bone field lies in the fact that, rather than targeting a bone-specific pathway, as is the case for all current treatments for osteoporosis, we targeted a fundamental aging process that has the potential to improve not only bone mass, but also alleviate other age-related conditions”.

2. Using peripheral blood stem cells which have been shown to give improvements in Osteoporosis

3. Utilizing initially IV loading doses of NAD+ with the NAD Kinase patches and then maintaining NAD levels with oral formulations which are typically higher doses than usually recommended.

This regimen is unique and at the same time seems to have an excellent safety profile especially when looking at the side effects of various Osteoporosis medicines. Furthermore, this regimen also has significant anti-aging benefits. Thanks Dr. P