We have recently obtained another key weapon in our office. This weapon is a true Class 4 COLD LASER. But this is not like the typical class 4 laser. Many people know about lasers but are not exactly sure how they achieve their goals. The basic science of lasers is that they use the principle of Photobiomodulation. The following illustration shows this concept.

Photobiomodulation is defined as a form of light therapy that utilizes non-ionizing light sources. These include near ultraviolet, visible light, infrared, microwave, radio waves, and low-frequency radio frequency (longwave) are all examples of non-ionizing radiation. By contrast, far ultraviolet light, X-rays, gamma-rays, and all particle radiation from radioactive decay are ionizing light sources. Photobiomodulation is a NONTHERMAL process involving endogenous chromophores. The first law of photobiology explains that for a low power visible light to have any effect on a living biological system, the photons must be absorbed by electronic absorption bands belonging to some molecular photo-acceptors, which are called chromophores. Here is a good explanation of chromophores. A chromophore is the part of a molecule responsible for its color. The color that is seen by our eyes is the one not absorbed by the reflecting object within a certain wavelength spectrum of visible light hence the objects “steal” the objects from the wheel. Chromophores will elicit reactions at various biological sites. This process results in beneficial therapeutic outcomes including but not limited to the alleviation of pain or inflammation, immunomodulation, and promotion of wound healing and tissue regeneration. We can see this principle in the following illustration: 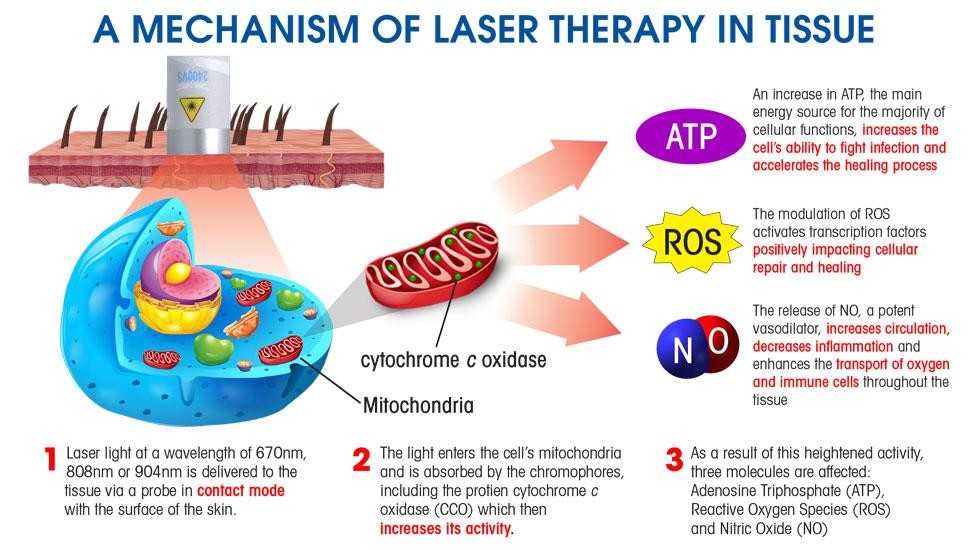 What we are able to see is that a very important aspect of laser therapy involves the mitochondria. The mitochondria produce ATP which is the body’s energy currency. It does this by stimulating the Cytochrome C Oxidase which is an enzyme in the electron transport chain of the Krebs cycle. Laser therapy produces a shift in overall cell redox potential in the direction of greater oxidation and increased Reactive Oxygen Species (ROS) generation. In a biological context, ROS are formed as a natural byproduct of the normal aerobic metabolism of oxygen and have important roles in cell signaling and homeostasis. ROS are well known to stimulate cellular proliferation of low levels, but inhibit proliferation and kill cells at high levels. Nitric oxide is also involved in laser therapy. It may be photo-released from its binding sites in the respiratory chain and elsewhere. Nitric oxide will increase vasodilation and thus increasing blood supply. Nitric oxide may also act as a neurotransmitter helping with pain control. Also, not to be overlooked is the fact that the mitochondria have many important tasks in many other aspects of cell biology and cell signaling pathways.

When all is said and done the application of a therapeutic dose of light to impaired or dysfunctional tissue leads to a cellular response mediated by mitochondrial mechanisms that reduce pain and inflammation, speed healing, and cell hemostasis. These cellular mechanisms responsible for the effect of visible light on cells include cytochrome c oxidase. Mitochondria are thought to be a likely site for the initial effects of light, leading to increased ATP production, modulation of reactive oxygen species, induction of transcription factors, and possible changes in mitochondrial DNA. These effects in turn lead to increased cell proliferation and migration particularly by fibroblasts. Fibroblasts are responsible for the production of collagen which is a basic building block for many of the body’s tissues including bone, cartilage etc. The laser’s overall effect is that   it will bio stimulate cells to increase cellular growth and regenerative activity, while simultaneously deactivating 7 or the 9 enzymes that cause inflammation by up to 70%.

Another unique aspect of lasers is that they are considered to be monochromatic, coherent and collimated. Monochromatic means that there is a single wavelength which stimulates particular human tissues that will only respond to that specific wavelength being utilized. Coherent means that it minimizes the photon scatter as light interacts with the tissue. Lastly, because lasers have a higher power that works with a specific wavelength, they are collimated which allows it to actually reach the deep tissues. The following illustration drives home these points. 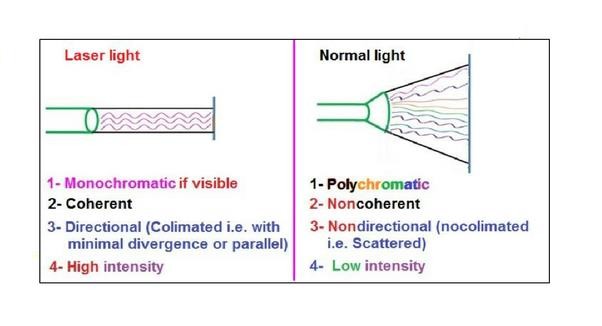 HOW ARE LASERS CLASSIFIED?

One may ask how are the lasers classified? The FDA classifies lasers from I to IV.  For instance, a Class IV Laser is any laser device that the FDA has determined is powerful enough to pose a significant risk of injury to the eye. Consequently, being Class IV does not necessarily make a

laser more effective, as that would depend upon what you intend to do with it and how you use it. Some Class IV lasers are used in health and medical settings for a wide range of therapeutic applications. Others are used for construction, cutting, burning and by hobbyists such as high-powered laser pointers.

On the other hand, most, cold lasers are also known as low-level lasers, they are among Class II and Class III lasers. Cold lasers have a power output of less than 500 mW. These lasers are called “cold” because they do not generate a thermal effect. But we must realize that the decreased power will also decrease the penetration depth of the laser. The vast majority of lasers in medical use are not true class IV cold lasers but class III lasers. Many of them are advertised as a Class IV lasers but in reality, they are Class III lasers. If they happen to a Class IV laser then most of the energy is expended as heat. They may have some bells and whistles and other gimmicks. But it does not make them any more effective. As we can see in the following illustration, typically a Class IV laser will need much less treatment time than a Class III laser. Also, we will obtain a much greater depth of penetration with the Class IV laser. What most medical professionals do not seem to understand is that a laser with many medical benefits produces it benefits with LIGHT ENERGY NOT HEAT. Thus, when one is looking to derive benefits from the laser, heat should not be a consideration. THE PHOTONIC ENERGY IS WHAT ONE NEEDS TO BE CONCERNED ABOUT. The following illustration will give an idea about the difference. The most significant difference in the various types of lasers is the depth of penetration. 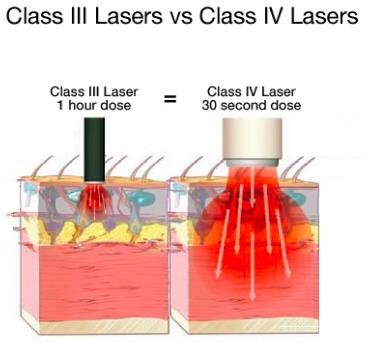 There is a misunderstanding that a more efficient laser will produce heat. This is simply not the case. Most of the time when we are utilizing a laser we are interested in the depth of penetration. We also do not wish to subject the patient to long hours of treatment. So, if we can eliminate the heat and get penetration of depth than we may have something special. When all is said and done IT IS THE PHOTONIC ENERGY WHICH ACCOMPLISHES THE REPAIR.

WHAT WOULD BE MY CHOICE FOR AN OPTIMAL LASER?

I have used lasers for many years. The use of lasers for musculoskeletal conditions has long passed the point of being experimental. There are many different types of lasers in use. In our clinic we have been very happy with our laser sleeves and our original hand-held Class IV type laser. The original Class IV laser which we have been using requires eyewear protection and it will produce heat which could burn the skin. Nevertheless, it was efficient but at the same time there was a risk of thermal injury and because of the thermal considerations I believe the penetration was limited.

If I were able to design a laser I would want one to be a Class IV laser that essentially did not cause any thermal damage. To be effective, the laser would have to have a power output of greater than 500 milliwatts. It would need to be monochromatic and have a wavelength of approximately 680 mM which is the ideal wavelength to stimulate the mitochondria. This is the sweet spot in the red spectrum range. It obviously requires eyewear. Also, it is cold laser. What are the differences between and hot and cold laser? Again, Cold Lasers are therapeutic lasers that produce an insignificant amount of heat and are extremely safe for use by professionals.

Let us take a look at the specs of the new laser. The output of the new laser is 750 milliwatts. Remember, the energy output for the Class IV laser is above 500 milliwatts. So, we definitely classify as a Class IV laser by power output. The new laser is monochromatic so it essentially stays on one wavelength and its wavelength is 680 nM which is the sweet spot for mitochondrial stimulation etc. The wavelength is 680 nm. This is the sweet spot in the red spectrum range. This provides both a large safety margin and potent force. If we were to lower the wavelength we could lower the safety margin. The last aspect to an ideal laser is what is called lumen intensity. We need to look at some physical aspects of light when looking at lumen intensity. There are three terms we want to know when assessing lumen intensity. These are lumens, lux and candela. A good way to remember the differences between terms is:
⦁    Lumens are how much light is given off
⦁    Lux is how bright your surface will be
⦁    Candela measures the visible intensity from the light source.
The lumen intensity of the new laser is 550 lumens per millimeter of tissue radiated. The beam profile is one millimeter. This last spec will allow the user to pinpoint targeting tissue. Example would be a meniscus tear located posteriorly in the medial compartment, or a tear in the supraspinatus located inferior to the acromion for example. This later spec you can only utilize the function of when the laser is a true class four. You need the power of penetration without the heat damaging aspect. This is a very important aspect and the one important principle which needs to be conveyed and understood - not easy to do! True photonic intervention is dependent on absorption of the light force or energy. Not in the heat transmission normally incorporated into laser modules. The light is the energy! Again, we see a picture of our new Class IV laser. Notice it is a hand-held laser. It is battery powered. Many times, simplicity is a goal strived for but many times seldom achieved.
The next illustration is a summation of all the benefits our new Class IV laser is able to achieve while at the same time being extremely safe to the patient as long as the proper eye precautions are taken. The last two illustrations are videos comparing the new class IV cold laser with a typical Class IV laser. The differences between the two are remarkable. 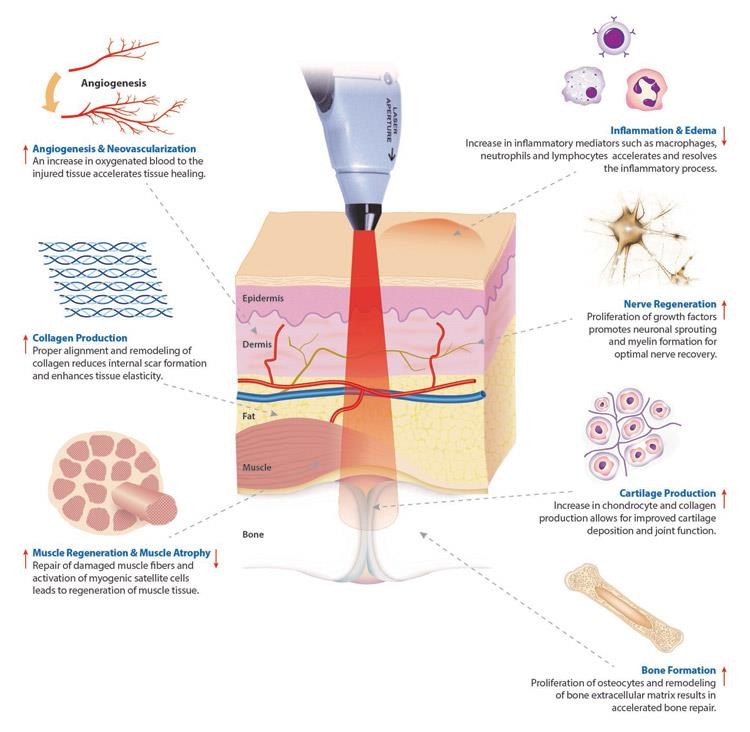 I suspect this new Class IV cold laser may be a game changer. The preliminary results in the office are quite impressive. We are truly making use of photonic energy to make a difference. Time will tell, but this seems to be exactly what we asked for. 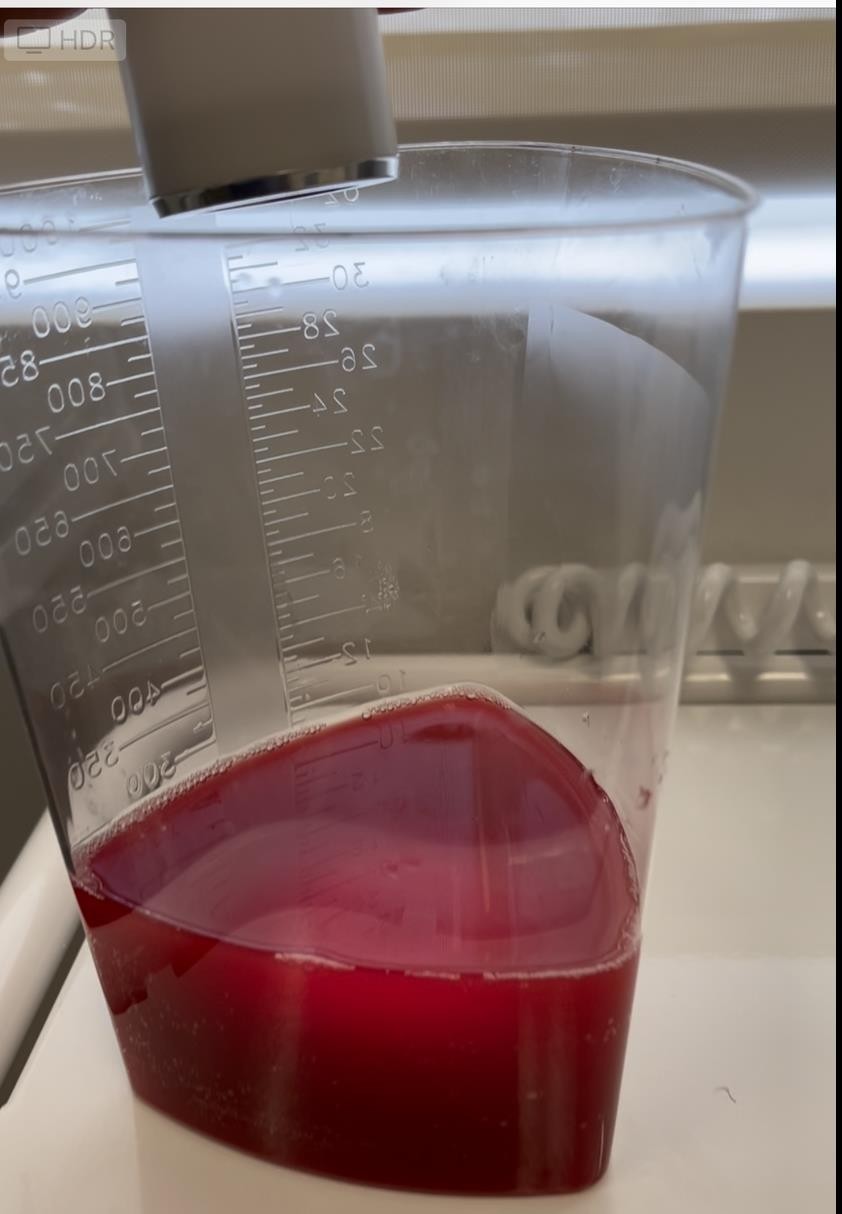 This is the Class IV hot laser shined into a container having a mixture and saline. We can see the red color from the laser is not vibrant.  Realize that when the laser is being used on the body it will need to penetrate a mixture of saline and blood.

The second picture is of the Class IV cold laser. Notice how vibrant the color is. The same will happen in your body. Realize that the only difference between these pictures is the lasers. The container is the same container. 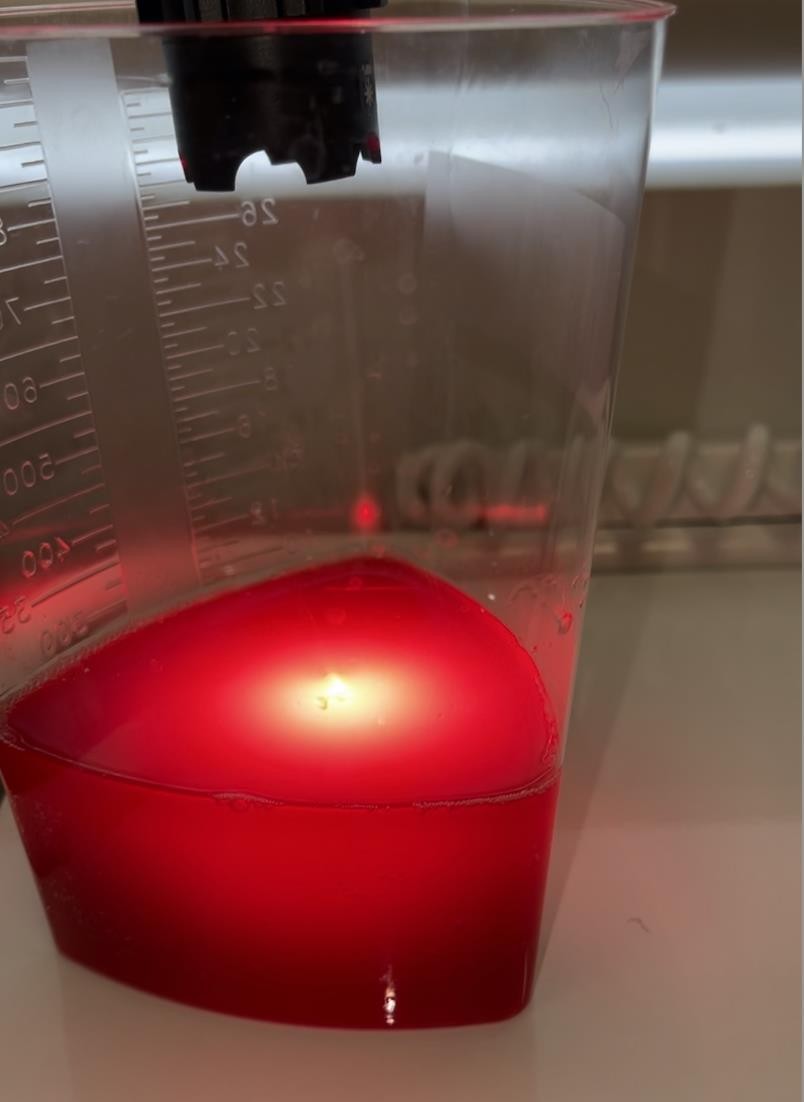