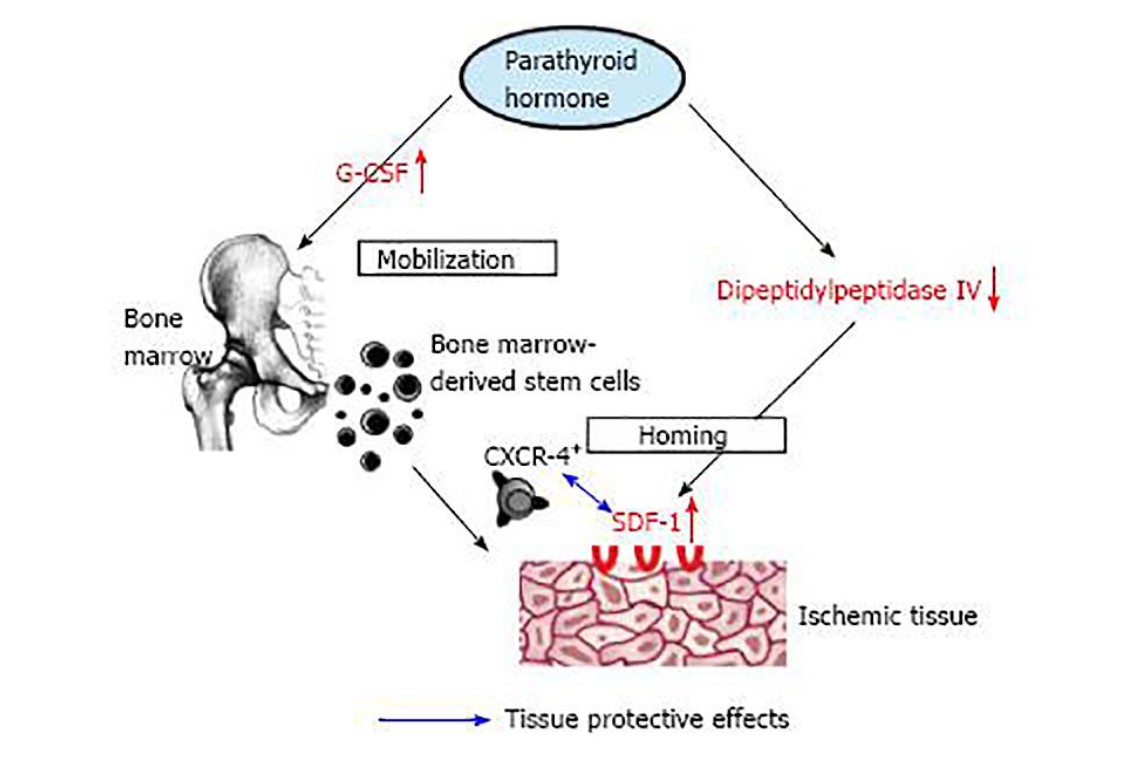 In the diagram, we see one aspect on how we can increase stem cell numbers in some of our procedures in a safe and efficient way.  We are constantly looking for ways to increase the stem cell output from bone marrow.  We know all too well that most of the regenerative cells that we inject into the joint typically survive for only a short period of time.  Their release of growth factors is what gives the various signals for more cells to visit the area or, just as importantly, for some of the neighboring cells to help accomplish repair.  It becomes a numbers game.  The more cells we have in circulation the better chance we have to achieve success.  Now, if we are able to find a medication that can increase stem cell numbers and at the same time have an effect on the health of the cartilage then we have something special.  Parathyroid hormone (PTH) may be just the ticket.

For a number of years now, we have been using a clone of Parathyroid hormone (PTH).  Another PTH clone is known as Forteo.  Forteo is used in the treatment of Osteoporosis.  We are actually using another analog clone of PTH which has given us considerable cost-savings and at the same time may work better.  We first started using PTH as a stimulator of Very Small Embryonic Like Stem Cells (see V-Cell Page).  There is a receptor on the V-cell surface that seems to stimulate these cells when the PTH binds to the cell membrane.  It appeared to activate these V-cells.

When we investigated PTH we were highly intrigued by a number of scientific articles that show PTH can have some interesting effects on articular cartilage.  The University of Rochester is studying PTH for its ability to inhibit chondrocyte hypertrophy and induce cartilage matrix production.  Chondrocyte hypertrophy is the beginning of the death spiral for chondrocytes which produce and maintain cartilage.  Chondrocyte hypertrophy-like changes play a role in early and late stage Osteoarthritis (OA).  Since not all cells in an OA joint are synchronized in their stage of the cell cycle, inhibition of hypertrophy-like changes might be a therapeutic target to slow down further OA progression.

There are a number of studies that show that PTH is chondro-regenerative.  There were many preclinical findings providing proof-of-concept that (PTH) may be useful for decelerating cartilage degeneration and inducing matrix regeneration in osteoarthritis patients.

In addition to bone as a target, signaling downstream of the type I parathyroid hormone receptor (PTHR1) regulates chondrocyte differentiation.  Parathyroid hormone-related peptide (PTHrP) a clone, is a potent stimulator of proliferation and collagen synthesis and suppressor of maturation.  One classic article on this effect of PTH comes from the work of Dr. Eric Sampson and his group from the University of Rochester.  They were able to show the chondro-regenerative properties of PTH.  So, we can see that PTH may have some powerful effects on improving the status of articular cartilage and its underlying bone.

Another aspect of Parathyroid hormone is that it increases PRG4 expression which has been reported to inhibit articular cartilage degeneration in arthropathic joints.  Lubricin is present in synovial fluid and on the surface (superficial layer) of articular cartilage and therefore plays an important role in joint lubrication and synovial homeostasis.  Lubricin is the most lubricating and anti-adhesive molecule in the human body.  Lubricin biosynthesis and bio distribution are mostly regulated by cytokines and growth factors.

When first isolated, cartilage lubricin was called “superficial zone protein” (SZP) Lubricin, MSF, and SZP are now collectively known as Proteoglycan 4.  Lubricin was originally identified as a lubricating glycoprotein present in the synovial fluid, specifically synthesized and expressed by articular chondrocytes (cells that makes cartilage) of the superficial zone.  It is recognized to have a major protective role in preventing cartilage wear, synovial cell adhesion and proliferation and reducing the coefficient of friction of the articular cartilage surface.

Hyaluronic acid (HA), one of the main components of the extracellular matrix, is considered a key player in the tissue regeneration process.  It has been proven to modulate, via specific HA receptors that are located on cell membranes, inflammation, stem cell migration, and angiogenesis (formation of blood vessels).  These are the main phases of healing.  We typically use Hyaluronic acid in our treatment protocols.  It is a very specialized form we are using.  Unfortunately, many clinics performing stem cell treatments do not go to this length of utilizing Hyaluronic acid.

This is not where the story about the benefits of PTH stops.  One of the missions of the regenerative medicine doctor is to come up with ways in which we are able to increase stem cell output from the bone marrow.  We are aware that certain supplements may help in this endeavor.  One such supplement that comes to mind is StemXcell which is licensed by the University of South Florida.

The problem with these medications is that they are very expensive and, at the same time, do present some substantial risks.  Another product which increases stem cell output is Procrit.  Procrit increases the number of red blood cells released into the circulation.  Procrit and GCSF are manufactured by recombinant DNA technology meaning it is produced by Escherichia coli (E coli) which are bioengineered.  Many medicines are produced by bio-engineered E. coli.  From time to time, we have utilized some of these recombinant DNA products in our lab.

What initially got our attention with PTH was the effect it has upon bone marrow.  PTH has been demonstrated to influence and expand the bone marrow stem cell niche where hematopoietic stem cells, capable of both self-renewal and differentiation, reside.  Moreover, intermittent PTH treatment is capable to induce mobilization of progenitor cells from the bone marrow into the bloodstream.  This is what has whetted our appetite.

We will give a NO supplement to increase the effects on bone marrow.  This supplement is called Neo-40.  We have used it for years to help increase the marrow stem cell output.  However, PTH seems to have a more profound effect on marrow stem cell release.  The PTH is given in intermittent doses.  Stimulation with PTH showed a significant increase of all characterized subpopulations of bone marrow-derived progenitor cells (BMCs) in peripheral blood (1.5- to 9.8- fold) similar to GCSF.  Luckily, PTH has a much better safety profile than GCSF.  Also, our source is much more reasonably priced.  This program forms a part of our Advanced Cellular Repair Division.

On doing research, we find one more important aspect of PTH.  PTH seems to increase the amount of a chemokine called SDF-1 also known to many PHDs as CXCL-12.  The major role of chemokines is to act as a chemoattractant to guide the migration of cells.  The receptor on the cells that attracts the SDF-1 is called CXCR-4.  The CXCR-4 is expressed on many circulating progenitor cells.  The CXCL-12 and the CXCR-4 axis is one of the main axis of stem cell migration and homing.  SDF-1 acts as a “tractor beam” on stem cells much in the spirit of Star Wars.

We continue to expand our uses of PTH.  Luckily, we have an excellent source of a clone of PTH which is both effective and cost-efficient.  We are using PTH on an intermittent basis.  Over time, we will find other medications and supplements to complement our use of PTH.  As we strive for continual improvement, we are forever pushing the envelope.