WHAT’S THE SCOOP WITH THE NEW COVID-19 VACCINES AND WILL WE STILL NEED TO WEAR MASKS??? 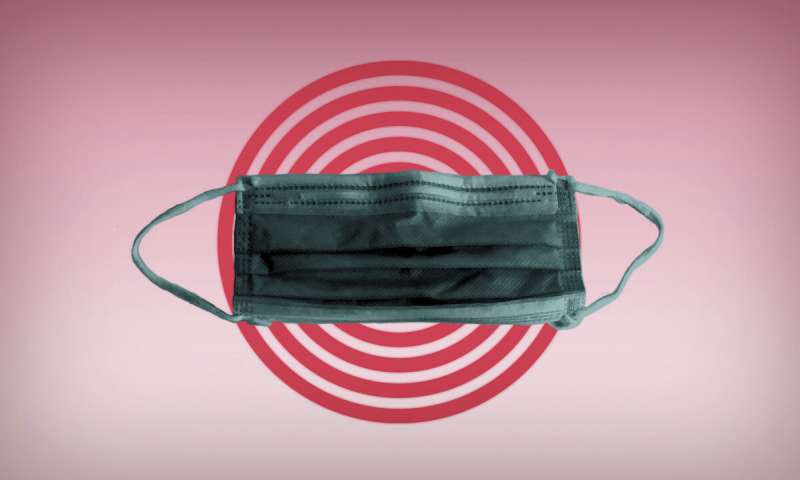 As a physician and scientist, I always like to put politics aside. I must give accolades to Operation Warp Speed. It is difficult for people outside the biomedical research circuit to grasp the magnitude of creating a working vaccine for any disease, within a year. To put that in perspective, the fastest vaccine development cycle on record was four years, for mumps. To have a vaccine developed, found to be relatively safe, and available for wide distribution in such a short period of time is unheard of. This dedication and mind set reminds me of back in the 1960s when we were involved in the space race for the moon. It took us 10 years to go from dream to reality. For the vaccine race it took us 10 months to go from dream to reality. These two achievements are not that dissimilar. The space race gave our world many different gifts of technology ranging from different types of plastics to computer technology. Our society would be much different without the “technological gifts” from the space race. I suspect we are going to see similar “gifts” from the vaccine race that will forever change our society. First let’s talk about the implications for the here and now about the vaccine.

One big question everyone has if it will still be necessary to wear a mask after receiving the Covid-19 vaccine? The answer for this is yes. For a couple reasons, masks and social distancing will still be recommended for some time after people are vaccinated. First off remember that the protection the vaccine affords will take a few weeks to develop. We will need to get two shots and effective immunity may take a few weeks after the second injection. The still unknown out there is if the vaccine protects us from the infection or does it just prevent symptoms? Potentially, vaccinated people might still be able to get infected and pass the virus on, although it would likely be at a much lower rate. Lastly, the sheer numbers of people that will require vaccination will take several months to complete. So, for now I do not see masks going away until sometime late in the second half of 2021.

WHAT ABOUT THE VACCINE ITSELF? 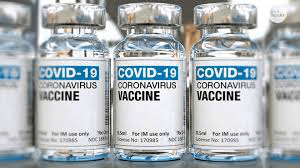 Any vaccine has controversy to it, yet by and large, they have changed the course of history in a positive way. Just read about the struggles with the Polio virus until an effective vaccine was produced. The Polio Virus was a scourge that would cause paralysis in many otherwise healthy people. Also, unlike the Covid-19, the Polio Virus had a predilection for younger patients actually it was also known as “infantile paralysis”

WHAT IS THE VACCINE MADE OF? THE ANSWER IS MESSENGER RNA (mRNA) 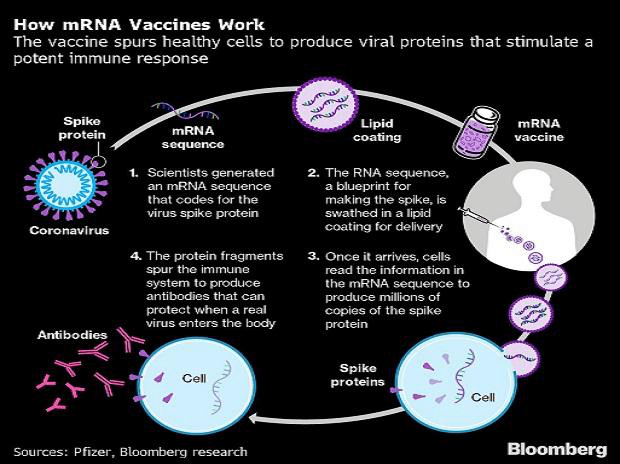 Every strand of mRNA is made up of four molecular building blocks called nucleosides. But in its altered, synthetic form, one of those building blocks, like a misaligned wheel on a car, can throw everything off by signaling the immune system. Thus, scientists simply subbed it out for a slightly tweaked version, creating a hybrid mRNA that could sneak its way into cells without alerting the body’s defenses, a giant step. That was an aha moment. It changed the course of history.

Looking at things further, the above diagram is an excellent representation on how the Covid-19 vaccine works by using mRNA also known as messenger RNA. In molecular biology, messenger RNA is a single-stranded molecule of RNA that corresponds to the genetic sequence of a gene. One can consider mRNA as a blueprint. The mRNA is read by a ribosome which subsequently synthesizing a protein in the cell. In step 1 of the above diagram we see the protein spike on the virus outer shell. What the scientists do is make a mRNA sequence that codes (blueprints) for the virus spike protein. Once the spike is produced it is mixed with a lipid coating and is prepared for injection into the patient. Once inside the patient the mRNA prompts the cells to produce millions of spike proteins. The spike proteins than stimulate the immune system to produce antibodies to protect the cell when a virus attacks the cells. Although this is a simplistic view it is gives a good idea on how the vaccine works. What I like about the next diagram is that it shows more specifics about the immune system. We see that the immune system is making use of what are called T-helper cells. The T-helper cells recognize the virus and activate either cytotoxic T cells which kill virus infected cells or B cells which launch antibodies which will block the virus from infecting healthy cells.

Antibodies that are produced may not last that long but the T cells should give us long lasting immunity. This may explain why a large portion of the population may be able to deal with the Covid 19 virus due to previous exposure to common cold viruses which indeed have some cross over to Covid-19. I feel comfortable that the immunity we receive from the vaccine will be long lasting. I feel the same about the immunity received from an infection.

SOME COMMON QUESTIONS ABOUT THE VACCINE 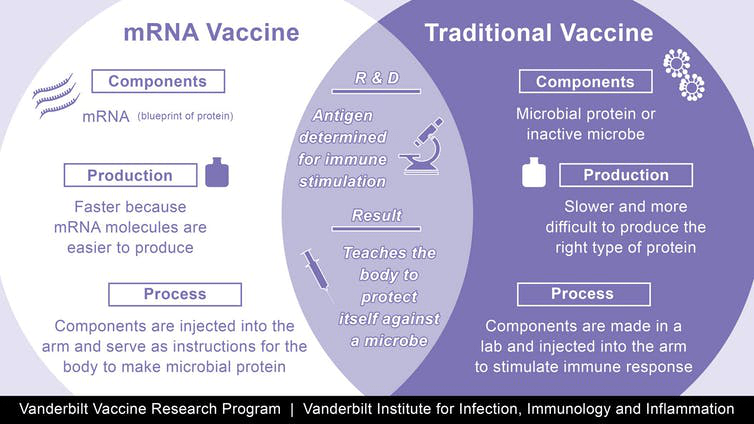 One important question people are asking is how the new vaccine is different from traditional vaccines. The above diagram shows the major differences on how the vaccines are produced. Traditional vaccines use bits of injected proteins to train the immune system to take down future viruses displaying those same proteins. Manufacturing them takes months, a timescale too slow to combat emerging epidemics. mRNA vaccines, on the other hand, simply encode these protein fragments in a single mRNA strand. As mRNA companies optimize and scale up their enzymatic production of mRNA, scientists anticipate these vaccines could be made in a matter of weeks.

A number of questions arise concerning the vaccines. One question is if the mRNA will incorporate into our DNA. The simple answer to this is NO. mRNA is designed to transcribe proteins etc. Its job is not to act as an enzyme and affect the structure of the DNA. mRNA is not able to alter or modify a person’s genetic makeup (DNA). The mRNA from a COVID-19 vaccine NEVER ENTERS THE NUCLEUS OF THE CELL, WHICH IS WHERE OUR DNA IS KEPT. This means the mRNA does not affect or interact with our DNA in any way.

The vaccine will not cause you to test positive on the viral tests however if you are tested for antibodies that test may be positive.

Another question is if a person has had the virus should they get the vaccine? There is no simple answer to this question since we really do not know. Some studies show that natural immunity may not last long while others say it conveys the best immunity of all. I suspect that if one was infected with the Covid- 19 virus they would have long lasting immunity. However, we will need to view the landscape in a few months to see where we are on this question. It may very well turn out that both natural immunity and vaccine induced immunity may provide the best protection of all.

When will there probably not be a need for the vaccine?  The goal of the vaccination program is to achieve heard immunity. What percentage of the population that needs to receive the vaccine or have had a previous infection is still not known to achieve herd immunity.

MANY PEOPLE ASK ME IF I WILL TAKE THE VACCINE. THE ANSWER TO THIS QUESTION IS YES. I suspect that a vaccination will be required to travel to many different countries. Also, airlines such as Qantas will probably start requiring passengers to be vaccinated to travel on their planes. As a matter of fact, I reserved the domain name Immunityvisas.com for this very reason. I would suspect that the cruise industry may also require a vaccination to take a cruise. The bottom line is for the world to return to some semblance of normal we will have to achieve herd immunity either by immunization or actually having the disease or both.

ANYTHING ELSE WE WILL BENEFIT FROM WITH THE COVID-19 VACCINE BESIDES IMMUNITY? THE ANSWER IS mRNA THEURAPEUTICS

The two preceding illustrations give the essence of mRNA therapy. This is a therapy that already has and will continue to disrupt medicine.

Here is a quote that I read in an article that was written in early 2019 before we realized the pandemic was here: “When the first mRNA therapeutic crosses the finish line, we’ll all be winners, suggests CureVac, a biopharma that anticipates an mRNA stampede”. Like the space race of the 1960s, there will be much in the way of spinoffs from the Covid-19 vaccine. The first vaccines against Covid-19 aren’t just a landmark in the fight against the pandemic. They’re also the stepping stone for an unconventional technology that could one day defeat other ailments that have eluded doctors, from cancer to heart disease. What I am talking about here is the new field of mRNA therapeutics. This is possibly at the very heart of Stem Cell and Regenerative Medicine therapies. This is one of the basic mechanisms that can allow stem cell to help regenerate tissue. We can see how the Big Pharma and the Biotech industry has embraced this new technology. Perhaps they can come up with a vaccine for many types of cancer. There are already important achievements in the field of immunology and cancer with some promising new therapies. Remember that the Covid-19 virus was not the first kid on the block. Every year influenza kills at least 650,000 people. Perhaps with mRNA technology we can make one vaccine to essentially eliminate influenzas. This is not as far-fetched as it sounds. There is also a possibility that mRNA technology may be used for reprograming stem and other cells in the future.

There are still problems that we will encounter with mRNA therapy but these will be overcome. I think the appropriate way of ending this piece on the vaccine and mRNA therapy is to take some poetic license on the quote from Neil Armstrong as he was about to step on the surface of the moon: “that’s one small step contributed by many people but one giant leap for mankind”. Thanks Dr. P